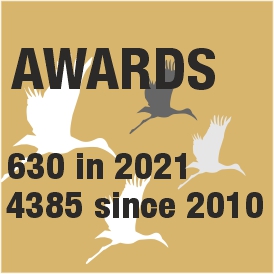 We highlight the following awards in 2021:

2. We won the “GREATEST PORTUGUESE WINE OF THE YEAR” in the WOMEN’S WINE & SPIRITS AWARDS 2021 with the GRAND’ARTE | Pinot Noir Lisboa red 2017

4. We won the trophy “PORTUGAL WINERY OF THE YEAR” in the contest BERLIN International Wine Competition 2021.

5. We won the “BEST WINE IN BOX 2021” in the Concours International Wine in Box - Toulouse / France with the ESCADA | Reserva Arinto Lisboa 2020. It’s the second consecutive time we get it. We won as well the same trophy with the PAXIS | Arinto Lisboa white.

6. We won the trophy "PORTUGUESE WINE OF THE YEAR", in the CHINA WINE & SPIRITS AWARDS 2021 with the GRAND'ARTE | Alvarinho Lisboa white 2020.

7. We won the trophy "PORTUGAL WINERY OF THE YEAR", in the NEW YORK International Wine Competition 2021.

José Neiva Correia, owner and chief winemaker of the company declared: "We are very proud because it is an excellent recognition of the effort of our working group that every day strives to get the best price and quality in all our wines. They aren’t an end in themselves, but they are a strong recognition of our work, helping those who work with us around the world to get the message to their customers of the excellence of our work."

DFJ VINHOS was created in 1998, has 250 ha of vineyards certified for sustainable production, exporting more than 99% of its production of 10 million bottles to more than 50 countries.

José Neiva Correia is the owner of the company and the chief winemaker, producing wines since 1974.

The global recognition of José Neiva Correia and DFJ VINHOS has been a constant as shows that important highlights: